Justice for All: Establishing a National Compensation Scheme for Survivors of Modern Slavery 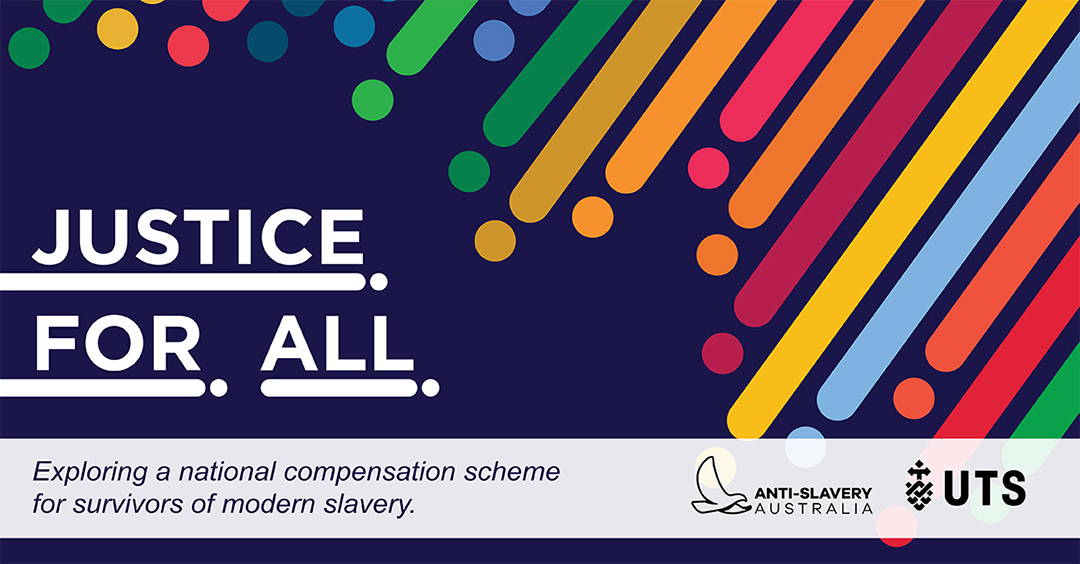 Modern slavery in all its different forms involves gross violations of human rights and exploitation of power. In Australia, thousands of people have experienced modern slavery. However, there is still no proper form of redress at a national level for these federal offences, and the State and Territory victims’ compensation schemes are inconsistent. The lack of a coordinated approach to compensation has been a major impediment to victims of modern-day slavery obtaining fair, effective, and timely access to justice, and departs from international best practice. Anti-Slavery Australia strongly advocates for a targeted national compensation scheme to properly remedy the effects of modern-day slavery in Australia and assist victim-survivors to move forward and rebuild their lives.

Australia is a signatory to numerous conventions and treaties that require it to provide access to effective remedies to victims of human trafficking, slavery, and slave-like practices. For example, Australia is a party to the UN Convention against Transnational Organized Crime and its Palermo Protocol. Article 6(6) of the Palermo Protocol provides that each State Party shall ensure that its domestic legal system ‘contains measures that offer victims of trafficking in persons the possibility of obtaining compensation for damage suffered.’

Australia is clearly committed to providing effective remedy to survivors of modern slave and slave-like practices, yet under the current system fails to meet these commitments

Why a national compensation scheme?

Effective remedy for survivors of modern slavery can serve the following functions.

Challenges with the state and territory schemes.

Although NSW has sought to address modern slavery through the Modern Slavery Act (NSW), state-based reform alone is not enough to resolve the inherent flaws of compensation for federal offences being dependent on state or territory victims of crime compensation schemes. The problems of relying on state and territory schemes are manifold. ASA has identified the following as the areas of primary concern.

Where an offender has been convicted of a modern slavery offence under the Criminal Code, victims may be able to obtain monetary redress under section 21B of the Crimes Act 1914, at the conclusion of the criminal trial before the case has been finalised. As convictions in modern slavery are rare, this remedy is not an option for many survivors. Even where a conviction is obtained, there are numerous challenges including:

A national compensation scheme for survivors of modern slavery in Australia is now overdue. If Australia is to take seriously its commitments to enabling survivors of modern slavery access to effective remedies for the harm they have suffered, it must commit to a national compensation scheme. The first statutory review for the Modern Slavery Act will begin in 2022. The improvement of access to remedies should be a key focus of the first review. Through years of research, advocacy, collaboration, and experience, ASA has created a model for how to best structure federal compensation for survivors. The model considers the following key areas:

Over the coming months, ASA will be continuing to secure support for this model, consulting with numerous professionals, advocacy and community groups, and relevant government agencies.

ASA is now seeking feedback on its model for national compensation through consultation. If you are interested in being part of our consultation process and supporting people who have experienced modern slavery in Australia, we would like to hear from you.

Proper compensation is an issue for the government, and it is important that they hear from their constituents. We encourage you to write to your local MP requesting that parliament introduce the national scheme. A guideline for writing this letter can be found here.

We encourage you to share the importance of this scheme with your networks. A sample PowerPoint for your use, outlining the key issues and advantages of our scheme, can be found here.

If you do decide to act on this important matter, we ask that you please let us know.

For more information or to discuss how you can get involved, please contact us at Jennifer.Burn@uts.edu.au or Morgan.Southwick@uts.edu.au