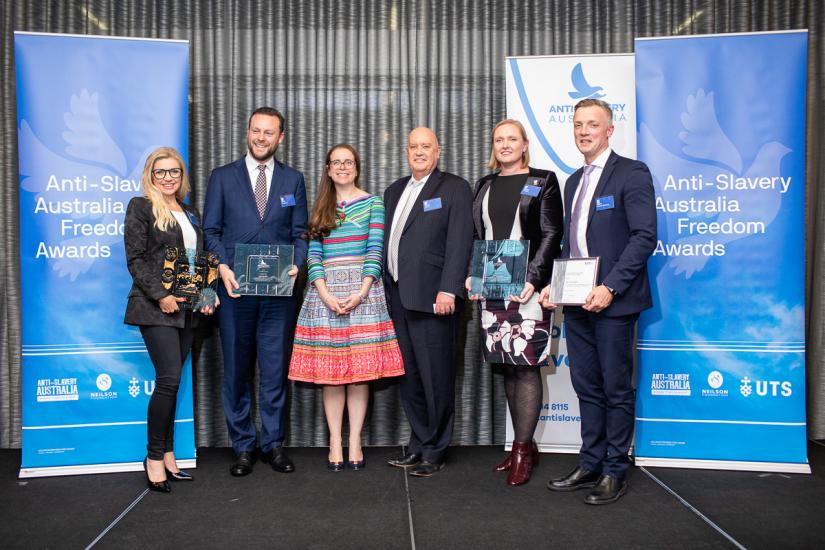 Outland Denim was established to help victims of sex-trafficking find work and a sense of self-worth after they’ve been freed from slavery.

Through the company’s ‘Denim Project’, factories in Cambodia employ, educate and train these women to ensure they have both a life and a livelihood.

At the 2019 Anti-Slavery Australia Freedom Awards, Outland Denim’s founder, James Bartle was recognised for his outstanding contribution to combatting modern slavery in the fashion industry.

The Freedom Awards began in 2011 to celebrate outstanding achievements in the prevention and elimination of human trafficking and all forms of slavery.

Much has happened in the seven years since then including the enactment of Modern Slavery Acts in both the NSW and Federal Parliaments.

UTS Law’s Paul Redmond is Sir Gerard Brennan Professor and Director of the Brennan Justice and Leadership Program, and a member of Anti-Slavery Australia’s Management Committee.

He says there’s been tremendous momentum and focus from government, civil society and business leadership in the anti-slavery fight:

The introduction of modern slavery legislation, at the federal level and in NSW, marked a significant step towards improving the identification and support of victims and strengthening business and human rights frameworks through transparency in supply chain reporting schemes.

She says the introduction of the Modern Slavery Laws gives Australia international credibility on an important issue of human rights:

The laws mean that supply chains must now be transparent and companies can no longer claim that they didn’t know – it’s a slow process but it is laying the foundations for significant change in business practices so that modern slavery can be conquered both at home and abroad.

Also recognised at the awards were:

And the ASA’s own Joanne Pugsley received a very special acknowledgement – the Anti-Slavery Australia Award.

ASA’s Professor Jennifer Burn is the acting Anti-Slavery Commissioner in NSW and paid tribute to Jo as a loved, trusted and valued member of the team:

As for Outland Denim, Meghan Markle’s wardrobe choice in Australia led to a phenomenal jump in global sales and revenue and, as a result, their Cambodian factory has been able to substantially increase employee numbers and training.

The company’s head of advocacy, Sally Townsend says they remain determined to change the game for victims:

We encourage our peers in other businesses to set a new standard for supply chain integrity – we must all use our privilege and power to address modern slavery.