Congratulations to the 2015 Freedom Award Recipients 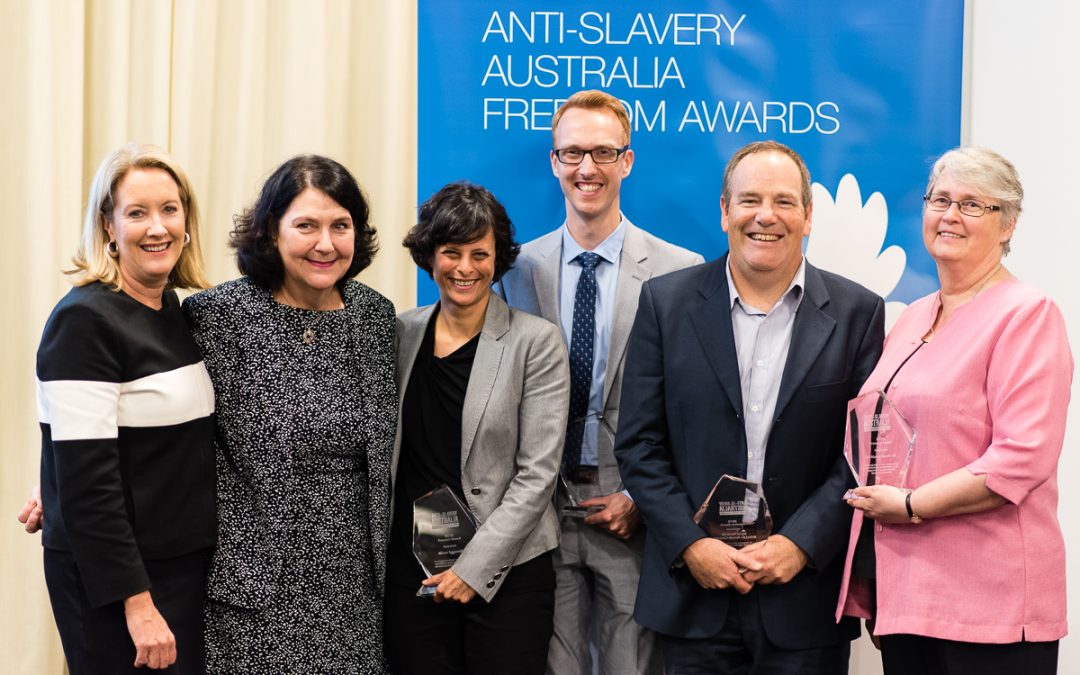 Recipients of the 2015 Anti-Slavery Australia Freedom Awards were celebrated at the University of Technology Sydney on Thursday 5th of November. The Freedom Awards recognise the outstanding work and contributions of individuals and organisations for initiatives against slavery, slavery-like practices, including forced labour, forced marriage, and human trafficking. The awards raise awareness of all forms of slavery and human trafficking, and promote the positive difference that individuals and organisations make to the lives of trafficked people.

The night was hugely successful with over a hundred guests gathering to recognise and celebrate those remarkable individuals and organisations that go above and beyond to raise awareness of human trafficking, slavery and slavery-like practices.

Anti-Slavery Australia was honoured to have former Sex Discrimination Commissioner, Elizabeth Broderick, deliver an inspiring keynote address. Among her countless achievements, Elizabeth is the Global Co-Chair of the Women’s Empowerment Principles Leadership Group, as well as a member of the World Bank’s Advisory Council on Gender and Development.

The Director of Anti-Slavery Australia Professor Jennifer Burn said the support on the night was overwhelming, we are inspired by the Freedom Award recipients who bring dedication and remarkable commitment to anti-slavery initiatives

Keynote speaker Elizabeth Broderick said it was a pleasure to take part in such a superb event, these awards bring together and acknowledge the contributions of the many, many people who work toward effectively tackling human trafficking, slavery and slavery-like practices.

Four awards were presented on the night.

Alison Aggarwal, Principal Adviser/Manager at the Australian Human Rights Commission received an award for her vital work in ensuring that a human rights perspective is embedded in the Australian response to human trafficking, slavery and slavery-like practices. Alison has consistently advocated for Australia to strengthen its response to human trafficking by protecting and respecting the rights of people who have been exploited in Australia. She has highlighted the need for further reform to ensure that survivors of trafficking have access to effective remedies. As well as her humanitarian work in Australia, Alison plays a critical role in promoting the human rights of women and girls in the Asia-Pacific region through her work with the Asia Pacific Forum.

Baptist World Aid Australia, for their Behind the Barcode Campaign. Launched in the wake of the catastrophic Rana Plaza factory collapse in Bangladesh in 2013, the campaign seeks to empower consumers to shop ethically. By shaping demand and increasing awareness of human rights abuses in the fashion industry, the campaign encourages companies to protect workers from exploitation and to be accountable for working conditions throughout their supply chain.

Sister Maree Marsh csb, a Brigidine sister, psychologist and former chair of ACRATH, (Australian Catholic Religious Against Trafficking in Humans). Maree volunteers as a psychologist at Anti-Slavery Australia and is an invaluable member of the team. As a psychologist, she has prepared more than 30 expert reports on behalf of survivors of human trafficking, slavery and slavery-like practices. These reports provide expert opinion and have been used in applications to the NSW victims’ compensation scheme. This specific contribution alone has resulted in more than $1 million in compensation payable to survivors. Maree’s involvement and commitment to vulnerable men and women is a testament to her dedication, professionalism and kindness. Maree supports survivors in rediscovering their own voice, strength and personal power.

Alan Morison, a veteran Australian journalist who owns and operates the Phuketwan news service in Phuket, Thailand. He has been an outspoken advocate on the plight of the Rohingya refugees and has, at huge personal cost, raised awareness of one of the world’s most persecuted groups. Following a controversial criminal defamation trial this year in which Alan and fellow journalist Chutima Sidasathian were acquitted, they drew international attention to the difficulties that journalists and NGOs face in reporting on human trafficking in Thailand. As a result of Alan’s determination, mainstream media in both Australia and the Asia Pacific have raised awareness of the vulnerabilities of the Rohingya people to exploitation through migrant smuggling and human trafficking.