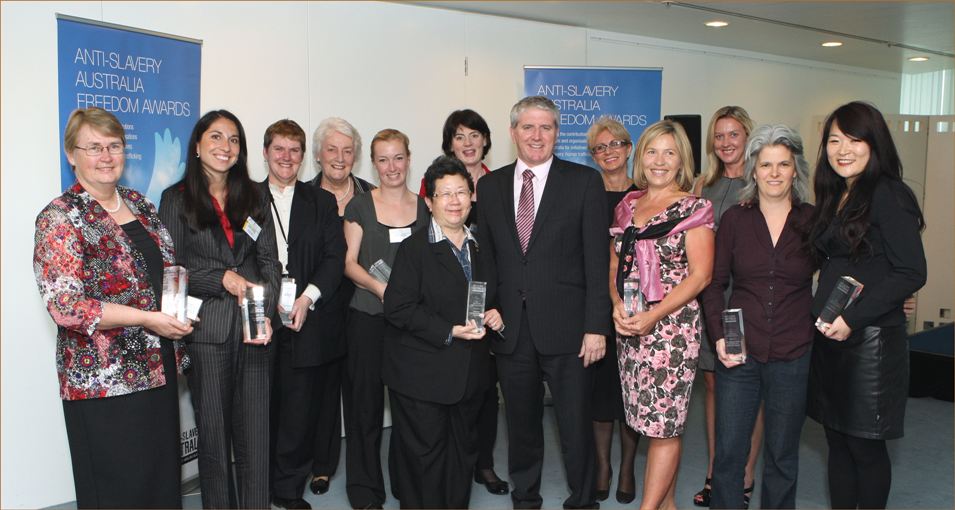 We were thrilled to announce the names of individuals and organisations recognised for their distinctive contribution and commitment to stopping slavery, people trafficking and forced labour. The Minister for Home Affairs and Justice Brendan O’Connor gave out the awards in a deeply moving award ceremony at Parliament House.

Mr O’Connor said, ‘The individuals and organisations recognised here today have played a pivotal role in developing and implementing initiatives against people trafficking and slavery.

The individual contribution award recipients are:

Sister Louise Cleary, Chair of the Australian Catholic Religious Against Trafficking in Humans

The organisation contribution award recipients are:

The Freedom Awards were developed by Anti-Slavery Australia using federal funding from the Proceeds of Crime Act. Further information about the award recipients is available below.

Brigidine Sister Louise Cleary is Chair and a founding member of ACRATH’s National Committee. Sr Louise has made a significant and dynamic contribution to the ongoing work of ACRATH in raising the community profile of human trafficking both internationally and in Australia, inspiring collaboration between community groups and identifying the need for legislative and policy change. (Sr Louise was be in Ireland in her new role as head of the Brigidine sisters. The award was received on her behalf by Brigidine sister Dr Maree Marsh).

Sister Pauline Coll is a member of the Good Samaritan order and was the inaugural chair and a driving force of ACRATH. Sister Pauline has been indefatigable in her personal endeavours to get human trafficking on the government and community agenda, forging effective and enduring partnerships with a range of diverse groups.

Federal Agent Jennifer Cullen of the Australian Federal Police made a significant contribution to Australian Government efforts to combat human trafficking from 2007 to 2009. In her role as National Coordinator of the AFP Human Trafficking Team she had oversight of police investigations in Sydney, Melbourne, and Brisbane. She developed a two-week residential program for senior investigators and oversaw investigations resulting in criminal prosecutions and convictions. Federal Agent Cullen has moved on from the human trafficking portfolio; however her legacy of corporate governance, crime specific training, and strong stakeholder relationships remains.

Dr Gallagher is recognised as a global authority in her field. She worked with the UN from 1992 to 2003, the last five years as Special Adviser on Human Trafficking to the High Commissioner for Human Rights. From 2003 to 2011, she headed the AusAID-funded ARTIP project to help develop more effective criminal justice responses to human trafficking in the ASEAN region. In Australia, Dr Gallagher has trained AFP specialist investigators and advised federal agencies on legal issues relating to trafficking; she has published widely on issues related to human rights, criminal justice and trafficking.

In her previous role as Assistant Secretary, Border Management and Crime Prevention Branch, Criminal Justice Division, Commonwealth Attorney-General’s Department, Dr Dianne Heriot had a key involvement in developing and implementing the Australian Government’s anti-people trafficking strategy. Dr Heriot had oversight of legislative developments in response to Australia’s ratification of the UN Trafficking in Persons Protocol and on behalf of the then Minister for Home Affairs (The Hon Bob Debus) steered the development of the National Roundtable on People Trafficking, bringing together government, key stakeholders and community to consult about Australian responses to people trafficking.

Fiona McLeod SC has been a pioneer in the field of anti-slavery and trafficking in Australia, in particular as a legal representative and advisor to victims. Ms McLeod is a prominent Melbourne barrister, and Senior Counsel. She was counsel in two landmark cases in Australia concerning slavery and human trafficking. Fiona has used her considerable legal expertise to pursue victims’ rights at law and to highlight the issue of modern-day slavery in Australia.

Merima Trbojevic is the Assistant Manager in the NSW Compliance Trafficking and Liaison, Status Resolution Field Team. Ms Trbojevic has been an Immigration officer for 11 years, and for the past five years, she has worked with men and women trafficked, enslaved and exploited in Australia. Ms Trbojevic has inspired many Immigration officers and community members with the way that she develops trust relationships, her respect for the human rights and dignity of trafficked people, her straightforward approach, and especially her vigilance in applying the law with compassion, rigour and integrity.

The Josephite Counter-Trafficking Project (JCTP) is a Congregational Ministry that responds to the needs of trafficked women. They provide culturally-sensitive mentoring to enable women who have been trafficked to Australia to make informed choices. They continue to develop and maintain grassroots contacts in the Asia-Pacific region so that choices and options for women returning to their country of origin are clearly understood.

Project Respect is a pioneer in this area, having provided direct support and outreach to women in the sex industry, including victims of trafficking, since 1998. They have been effective in raising the profile of this issue, particularly in Victoria, and have had an active engagement in the development of Australian legal and policy responses to trafficking of women.

In 2008, the Salvation Army opened a safe house for trafficked women. The safe house provides secure accommodation for women and individual support including crisis assistance, legal, health, training and job assistance. Residents at the Safe House receive comprehensive and culturally appropriate support as they rebuild their lives free from exploitation.

Anti-Slavery Australia was delighted by the number of nominations received and looks forward to recognising the contribution of dedicated individuals and organisations who work to prevent slavery every year.

Anti-Slavery Australia congratulates all our award winners and thanks them for their outstanding contribution to building an effective Australian response to trafficking and slavery.