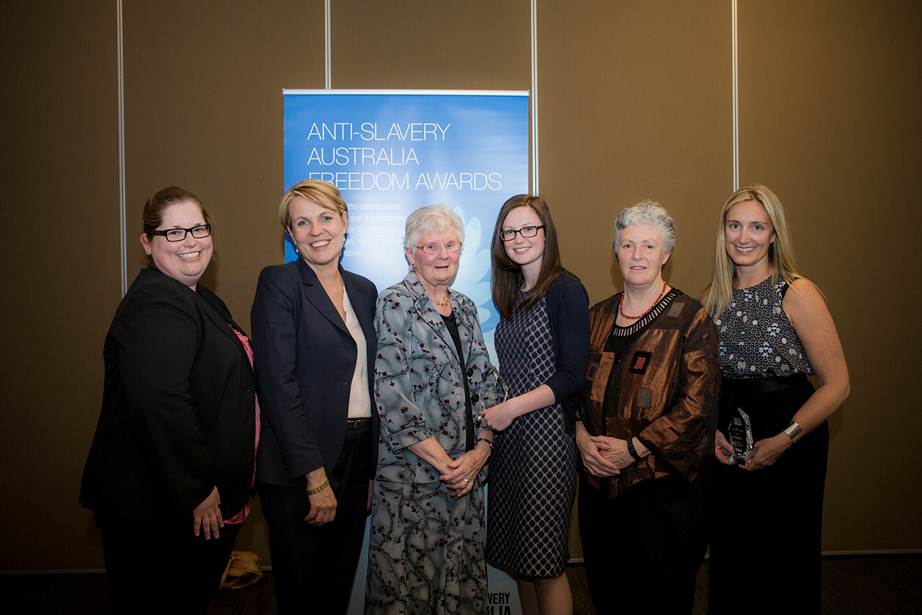 Recipients of the 2013 Anti-Slavery Australia Freedom Awards were announced at a ceremony held on Thursday 17th October at the UTS Aerial Function Centre.

At this gala event, around 100 guests gathered to recognise the outstanding work and long standing contributions of individuals and organisations to initiatives against human trafficking, slavery and slavery-like practices.

This year, Anti-Slavery Australia was honoured to have the keynote address delivered by the Hon Tanya Plibersek, Member for Sydney and Deputy Leader of the Opposition. Ms Plibersek has been a long term supporter of increased rights and protections for survivors of trafficking and slavery.

The selection committee would like to sincerely congratulate all nominees and announce the following individuals and organisation as the 2013 Freedom Award Recipients..

Melissa Stewart received a Freedom Award for her significant work in the area of policy, research, and evidence-building work on trafficking in persons in Australia and globally since 2009. Prior to her current role, Melissa acted as Deputy Manager of the UN Inter-Agency Project on Human Trafficking in the Mekong Sub-region, and has been well known and respected in the international anti-trafficking community since 2004. Melissa’s strong advocacy has influenced key policy and legislative developments of the Australian Government over the past 4 years, and she has continued to actively and successfully campaign for supply chains that are free of child labour, particularly through the development of the Don’t Trade Lives campaign.

Christine Caroline received a Freedom Award for her instrumental work in ensuring the successful operation of ACRATH’s Anti-Trafficking efforts. Christine has been very involved in ACRATH’s advocacy efforts. She has represented ACRATH at international meetings, drafted submissions to Parliamentary inquiries and met with Government and Parliament to advocate for the protection of the rights of those identified as trafficked or in situations of slavery and slavery-like practices. Christine is well known in the sector for her commitment to ensuring that victims of trafficking have access to the best possible outcomes and opportunities.

The Human Trafficking Section of the Commonwealth AGD received a Freedom Award for their significant contribution to Australia’s anti-trafficking efforts. The Human Trafficking Team have worked on key legislation that was passed in March 2013, filling gaps in Australia’s legislative response by criminalising forced labour, forced marriage and organ trafficking. The Team conducted extensive community consultation in the development of the new legislation. In response to community recommendations on meeting the needs of vulnerable witnesses, the Team developed legislation that included improvements to Vulnerable Witness Protection that extends to trafficking victims.

The Team takes a robust and collaborative approach in its leading of the implementation of Australia’s Action Plan to Combat Human Trafficking and Slavery, leading the Anti-Trafficking Interdepartmental Committee, and being instrumental in the development of the Guidelines for NGOs working with trafficked people. The Team have created and maintained strong partnerships with community and other government groups, particularly through the inclusive environment of the National Roundtable on Human Trafficking which the Team chairs. The Team also chairs working groups, two recent examples being the Supply Chains Working Group and the Communication and Awareness Working Group. The approach of the Human Trafficking Team has been a model for Government.