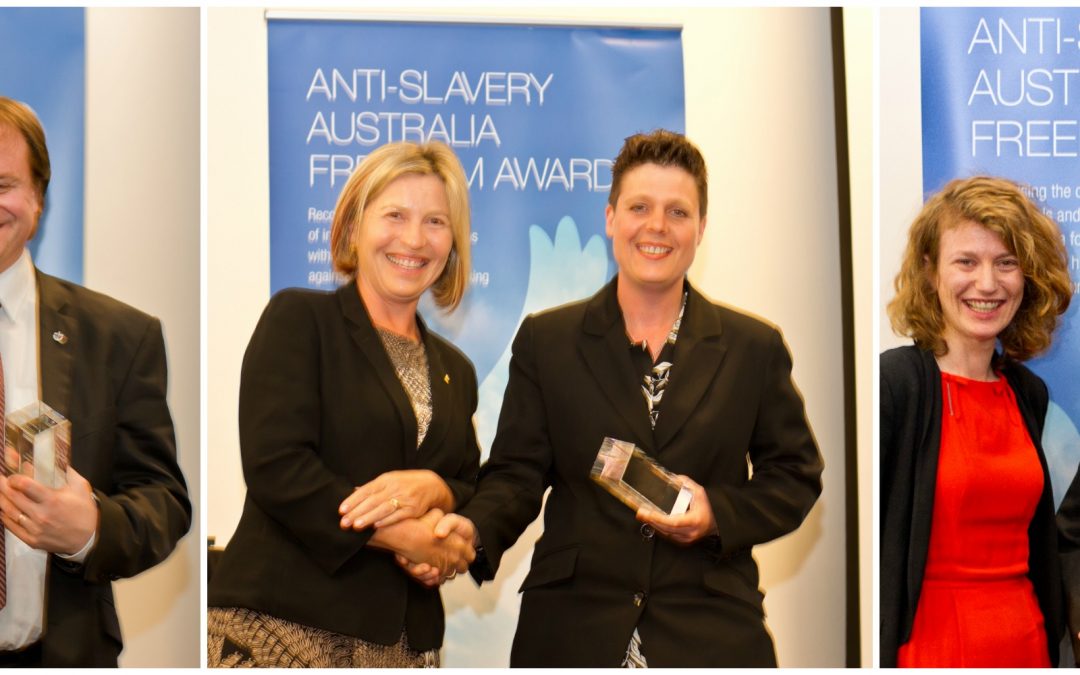 Rebecca Corby and Dr Mark Zirnsak awarded for their fight against trafficking and slavery in Australia at the 2012 Anti-Slavery Australia Freedom Awards.

On the 26th of October 2012, Rebecca Corby and Dr Mark Zirnsak were recognised at the Anti-Slavery Australia Freedom Awards for their outstanding work responding to the challenges of slavery, trafficking and forced labour.

Anti-Slavery Australia held the Freedom Awards for the second year running, following the success of the first awards ceremony held at Parliament House in 2011. Nominations for the awards were assessed by an independent panel of three experts who specialise in the field of trafficking and slavery in Australia.

Dr Anne Gallagher, Australia’s pioneer in the field of trafficking, spoke at the event emphasising the importance of law enforcement and ethical supply chains in the fight against trafficking. Dr Gallagher has received an Order of Australia for her past work and was recently declared one of ten Trafficking in Persons Heroes by US Secretary of State, Hillary Clinton, in Washington.

Rebecca Corby received a Freedom Award for her work with the Australian Federal Police for 22 years, dedicating the last eight years to her work in the Human Trafficking Team in Sydney. Her approach to investigation is rigorous and her respectful communication with witnesses is well-recognised by all who work with her. Rebecca has been described as a dedicated and knowledgeable Detective who offers advice and guidance to her peers and co-workers as well as being a dedicated parent and family person.

Mark Zirnsak received a Freedom Award for his significant contribution to combating labour exploitation through his work on ethical supply chains. Mark has campaigned against exploitative child labour since 1999 and worked with STOP THE TRAFFIK to build up a coalition of Australian NGOs to work on human trafficking and forced labour issues. His work in the area has included numerous campaigns to stop trafficking, slavery and forced labour in supply chains; a campaign for proper compensation and support arrangements for survivors of trafficking in Australia; and a campaign for an increase in funding for girls’ education worldwide through the Australian aid budget. Mark is also on the campaign working groups for the Micah Challenge and MAKE POVERTY HISTORY global campaigns to ensure that the Millennium Development Goals are achieved.

Frances Simmons was also acknowledged and presented with an Anti-Slavery Australia Award for her significant and dynamic contribution to anti-trafficking initiatives. Frances Simmons worked as a lawyer and researcher at Anti-Slavery Australia where she initiated training programs for law students, represented trafficked and enslaved people, researched law and policy and promoted a rigorous approach to research and policy development. Frances developed the strong relationship between Clayton Utz and Anti-Slavery Australia and dedicated herself to advocating for compensation for victims of trafficking and slavery. There have been many successful outcomes from her work on both migration and compensation matters.

A UTS Human Rights Award 2012 certificate of commendation was awarded to Clayton Utz for their work with Anti-Slavery Australia. With David Hillard as the Clayton Utz partner responsible for pro bono initiatives, Clayton Utz has been committed to the pursuit of victim’s rights at law, particularly through statutory victim’s compensation schemes. The partnership between Clayton Utz and Anti-Slavery Australia has led to the lodgement of over 20 applications for victims compensation with many favourable outcomes. David Hilliard and the Clayton Utz team have made a welcome and significant difference to the lives of trafficked people.